Researchers from Emory University in Atlanta, Georgia have developed a new method for influenza prophylaxis, published in Nature Medicine [1].

Sullivan et al. has fabricated plastic microneedles made of polyvinylpyrrolidone (PVP) to encapsulate a dried form of inactivated influenza virus. The microneedles penetrate the skin up to the portion of the dermis where antigen-presenting cells are present, and where PVP encapsulation dissolves and releases the influenza vaccine.

Email ThisBlogThis!Share to TwitterShare to FacebookShare to Pinterest
Labels: literature

Innocentive, an open innovation company, has opened up new challenges in the field of biomedicine on its website. Among them are to find:

If you or your laboratory are planning or currently working on brilliant solutions to these challenges, you have a big chance to win 10,000-50,000 US dollars, or even up to 1,000,000 US dollars.

Email ThisBlogThis!Share to TwitterShare to FacebookShare to Pinterest
Labels: news

Influence of Age, Sex, Ethnicity and IgE on Human Exposure and Immunity to Schistosomiasis Infections

Numerous factors may influence Schistosoma infection intensity and prevalence within endemic communities, including exposure-related factors such as local environment and behaviour, and factors relating to susceptibility to infection such as immunology and genetics. While animal studies performed in the laboratory can be tightly controlled, human populations are highly heterogeneous, varying according to demographic characteristics, genetic background and exposure to infection. The heterogeneous nature of human water contact behaviour in particular makes it difficult to distinguish between a lack of cercarial exposure and reduced susceptibility to infection as the cause for low levels of infection in the field. 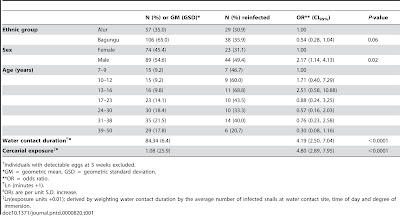 In this study we investigate risk factors for Schistosoma mansoni infection in a rural Ugandan fishing community receiving treatment as part of a multi-disciplinary longitudinal reinfection study. More specifically, we examine the influence that age, sex and ethnic background have on susceptibility to reinfection after anti-helminth drug treatment, but use individual estimates of cercarial exposure and multivariable methods in an attempt to remove noise created by environmental and behavioural heterogeneities. We then investigate whether schistosome-specific IgE immune responses could account for any remaining variations in susceptibility to reinfection. Our findings suggest that observed ethnic- and sex-related variations in S. mansoni reinfection were due to variations in cercarial exposure, as opposed to biological differences in susceptibility to infection. Age-related differences in reinfection were not explained by exposure, however, and appeared linked to the balance of IgE and IgG4 to the tegumental antigen SmTAL1 (formerly Sm22.6), which itself was significantly related to resistance to reinfection.

This study highlights the benefit of taking a multidisciplinary approach in complex field settings; it allows the ecology of a population to be understood and thus more robust conclusions to be made.

Email ThisBlogThis!Share to TwitterShare to FacebookShare to Pinterest
Labels: literature

Early diagnosis of dengue can assist patient triage and management and prevent unnecessary treatments and interventions. Commercially available assays that detect the dengue virus protein NS1 in the plasma/serum of patients offers the possibility of early and rapid diagnosis.

The sensitivity and specificity of the Pan-E Dengue Early ELISA and the Platelia™ Dengue NS1 Ag assays were compared against a reference diagnosis in 1385 patients in 6 countries in Asia and the Americas. Platelia was more sensitive (66%) than Pan-E (52%) in confirmed dengue cases. Sensitivity varied by geographic region, with both assays generally being more sensitive in patients from SE Asia than the Americas. Both kits were more sensitive for specimens collected within the first few days of illness onset relative to later time points. Pan-E and Platelia were both 100% specific in febrile patients without evidence of acute dengue. In patients with other confirmed diagnoses and healthy blood donors, Platelia was more specific (100%) than Pan-E (90%). For Platelia, when either the NS1 test or the IgM test on the acute sample was positive, the sensitivity versus the reference result was 82% in samples collected in the first four days of fever. NS1 sensitivity was not associated to disease severity (DF or DHF) in the Platelia test, whereas a trend for higher sensitivity in DHF cases was seen in the Pan-E test (however combined with lower overall sensitivity).

Collectively, this multi-country study suggests that the best performing NS1 assay (Platelia) had moderate sensitivity (median 64%, range 34–76%) and high specificity (100%) for the diagnosis of dengue. The poor sensitivity of the evaluated assays in some geographical regions suggests further assessments are needed. The combination of NS1 and IgM detection in samples collected in the first few days of fever increased the overall dengue diagnostic sensitivity.


Material reposted under the Creative Commons License.
Posted by ASEANDI at 11:23 PM No comments: